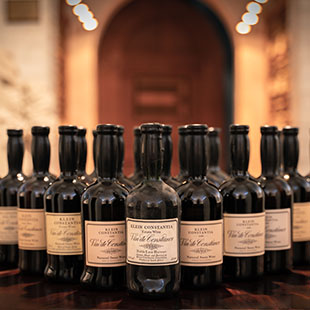 The last hour of the Strauss & Co South African Wine NFT (non-fungible token) online auction saw frenetic bidding as a rare lot of Vin de Constance was sold for a staggering R1,251,800 including commissions (£62,799k). This unique lot was part of a collection of 5 of South Africa’s finest wines that went under the hammer in the country’s first NFT online auction. An exciting opportunity allowing investors from across the globe the chance to bid on the ownership of older & future vintages of the legendary Vin de Constance.

The NFT offered the first 40 vintages of Klein Constantia’s world-famous sweet wine, including the 1986 through to 2012 in 500ml bottles as well as three magnums of each vintage from 2013-2027, estimated at R550,000-R750,000 (£28- £40k). Many of the wines within the Vin de Constance NFT are extremely rare – with only a handful of 1986 Vin de Constance left in the library, virtually no complete verticals are likely to exist outside of the estate.

Hans Astrom, Vice Chairman & shareholder of Klein Constantia, comments “We’re excited about this auction. It’s the first time in modern times, we have ever put a complete lot of Vin De Constance up for sale with the 40 vintages spanning over 5 decades. The wines have all been cellared at Klein Constantia, which guarantees provenance and authenticity. It is truly a unique and rare opportunity to acquire one of the world’s most collectible wines. This auction is a great opportunity for interested wine amateurs or collectors from all around the world to acquire some of South Africa’s great and rare wines that normally are not seen in the market. Fine wines are appreciated all around the world and the best of South African wines deserve to be on this platform as well.”

In a nutshell, an NFT is a digital asset representing the ownership of either a real life or digital object that is generally bought and sold online, frequently with cryptocurrency. Having taken the world by storm recently, Non-Fungible Tokens are quickly becoming recognised as a highly efficient way to package collections of wines for trading and investment. Once auctioned, the NFT can be traded by the owner on any platform.

previous next
We use cookies on our website to give you the most relevant experience by remembering your preferences and repeat visits. By clicking “Accept All”, you consent to the use of ALL the cookies. However, you may visit "Cookie Settings" to provide a controlled consent.
Cookie SettingsAccept All
Manage consent

This website uses cookies to improve your experience while you navigate through the website. Out of these, the cookies that are categorized as necessary are stored on your browser as they are essential for the working of basic functionalities of the website. We also use third-party cookies that help us analyze and understand how you use this website. These cookies will be stored in your browser only with your consent. You also have the option to opt-out of these cookies. But opting out of some of these cookies may affect your browsing experience.
Necessary Always Enabled
Necessary cookies are absolutely essential for the website to function properly. These cookies ensure basic functionalities and security features of the website, anonymously.
Functional
Functional cookies help to perform certain functionalities like sharing the content of the website on social media platforms, collect feedbacks, and other third-party features.
Performance
Performance cookies are used to understand and analyze the key performance indexes of the website which helps in delivering a better user experience for the visitors.
Analytics
Analytical cookies are used to understand how visitors interact with the website. These cookies help provide information on metrics the number of visitors, bounce rate, traffic source, etc.
Advertisement
Advertisement cookies are used to provide visitors with relevant ads and marketing campaigns. These cookies track visitors across websites and collect information to provide customized ads.
Others
Other uncategorized cookies are those that are being analyzed and have not been classified into a category as yet.
SAVE & ACCEPT